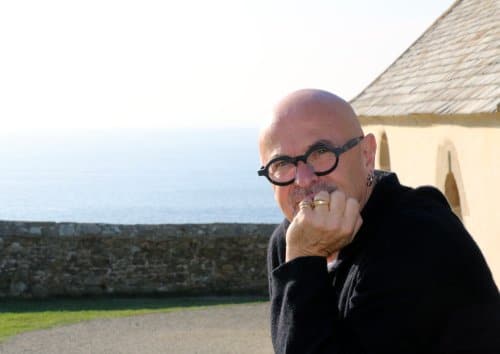 Posted at 14:17h in "Dialogues" by yfkemener 0 Comments
0 Likes
Share

This CD is derived from a stage performance called “Diologues” that was created and performed at the Théâtre de Cornouaille in Quimper in March 2006.
Yann-Fañch Kemener sings and sometimes recites song texts, working with pianist Florence Pavie and cellist Aldo Ripoche in a unique combination oftraditional Breton song and music with classical styles and composition. One can only imagine the dramatic effect of this performance on stage based on the emotional intensity of tbis CD. The performances are full of passion and underline the drama of traditional Breton songs where women are abducted by or married to men they do not love, where young men leave loved ones when drafted into the king’s army, or where magic and sorcery are ever-present and often menacing.

The songs from this CD are drawn from two famous 19th century collections: La Villemarqué’s Barzaz Breiz and Bourgault-Ducoudray’s Trente melodies populaires de Basse-Bretagne. And they are also drawn from songs collected and recorded by Claudine Mazéas in the 1950s and early 19608 and by Kemener himself (Carnets de route) who grew up with traditional songs around him. Kemener has carefully chosen and ananged the texts, and they are not sung as one might hear them at a fest noz or gathering of friends at a veillée, but performed for full dramaticeffect sometimes as much stated as sung. The piano and cello only add to the intense coloring of each piece.

While most of the songs and melodies on the CD are weIl known in Brittany, the performance here is far from the usual. There are two compositions that are not weIl known. “Prayer,” a cello and piano piece by Swissborn and American-naturalized composer Ernest Block (1880-1959) incorpora tes old Hebraic melodies. This piece leads into the Breton gwerz (ballad) “Ar Jouis” which recounts how a young girl is soldto a Jewish trader by her brother. Piano and cello are also featured in a composition by Breton composer Adolphe Mahieu (1892-1931) called “le Druide.”

This is a CD that requires some work on the part of the listener! Familiarity with the song texts – some of which are classics in the Breton tradition – and knowledge of Breton will definitely enhance one’s experience and appreciation for the way Kemener carefully crafts the words, singing style and interplay with cello and piano. The CD notes are helpful in describing how this performance is put together – the sources for the music and texts and the construction of the performance overall. Song texts are given in Breton and French with a very short synopsis in English. There are photos wmch give an idea ofhow the performance looked on stage.

This is not a CD you can casually throw on the CD player and then sit back and relax or multi-task as you listen. The passion of the performance requires your attention and an engagement of emotions. Whi1e probably best appreciated in a live performance where lighting and staging are part of the show, this is a remarkable recording in its innovative interplay of voice, piano and cello.